Last night we kicked off the fourth year of #ElemMathChat. Yay! It’s so exciting to spend an hour each week talking with and learning from so many passionate educators.

One thing I’ve often heard from participants is that they like that we regularly do math together during our chats. I didn’t want to disappoint in our first chat of the year, so I dropped in a few tasks. I thought I’d collect them together in a blog post in case anyone missed the chat or wants all the pictures gathered together in one place. So let’s get started!

This task actually appeared before the chat. I’ll admit that I sometimes try to cram a bit too much into our hour together – I want to do it all! – so I opted to move one of the questions out of the chat and instead turn it into something fun for folks to play around with during the day leading up to the chat.

I saw two common answers to this question throughout the day:

I owe Christopher Danielson thanks for turning me on to this deceptively simple question as well as for engaging with some of the folks yesterday who were tackling the question as it relates to this image.

I highly recommend checking out Christopher’s blog post where he talks more about this question and shares some images you just might want to use in your classroom. He only asks that you let him now what kids do with those images and ideas. You can share with Christopher on Twitter @Trianglemancsd.

For our first task during #ElemMathChat, I asked everyone to estimate the number of hats in this sculpture:

When I first saw this sculpture at the Fort Worth Convention Center at this year’s CAMT Conference, I was instantly curious how many hats were used to make it. It took some digging, but I finally came up with all the information I needed.

I asked participants to share their too LOW, too HIGH, and just right estimates. What I’m really looking for is the range they’re comfortable with. How risky are they willing to be with their estimates?

Notice the difference? One person isn’t as comfortable limiting the range of their estimates while the other person has narrowed it down to “somewhere in the 400s.” I don’t really care about the just right estimate so much because I value helping students come up with estimates that make sense and are generally close rather than valuing whether or not they guessed the exact number. Helping students get better at estimating and be willing to make riskier estimates takes time and practice, but it’s valuable work.

Here’s the final reveal with some additional information about the sculpture, in case you want to do this activity with your students:

As much as I love numberless word problems, I’ve been fascinated with numberless graphs this past year. I knew I wanted to include one in our chat! When I shared this first image, I asked my go-to questions, “What do you notice? What do you wonder?”

The engagement was high and it was so much fun to see what people noticed and wondered as they looked at the graph. 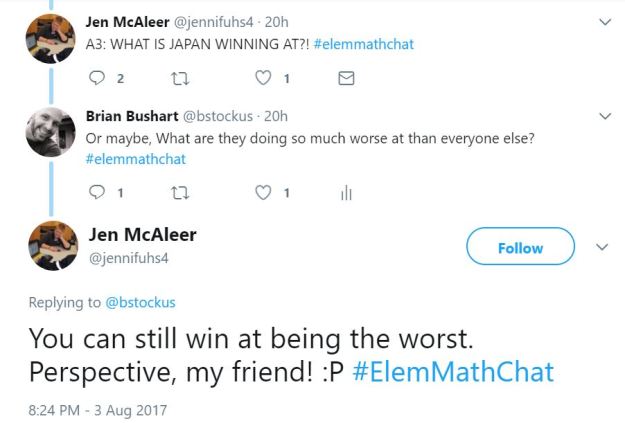 We moved on to another question before coming back for the second reveal. Again, I asked, “What do you notice? What do you wonder?” 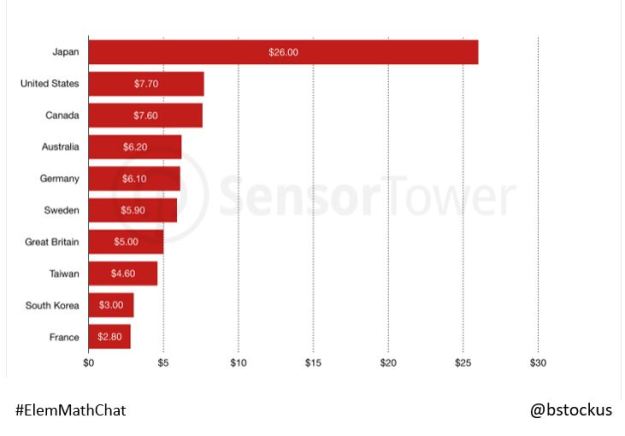 Adding the scale and currency amounts just increased the wonderings about what this graph could be about.

Finally, after building anticipation and making everyone wait through another chat question, I finally revealed the full graph and asked, “What questions could you ask about this graph?”

The noticing and wondering didn’t stop! It was great!

In case you’re wondering, Pokémon GO is a game you can download on mobile devices. The game is free, but there are things you can buy within the game. So what this graph is showing is the average amount people spent buying things inside of the game. In Japan, for example, looking at all the people in the country who have downloaded the game, each of those people has spent $26 on average. In the US, on the other hand, the people who have downloaded the game have each spent $7.70 on average. The interesting thing about this is that the data is a bit misleading if you don’t know more details:

This leads to a great discussion to have with kids, “If US players aren’t spending nearly as much in the game as players in Japan, then how come the total amount earned from purchases in the US is over $100 million more than in Japan?”

This isn’t doing math together, but I did want to share the final question of the night. 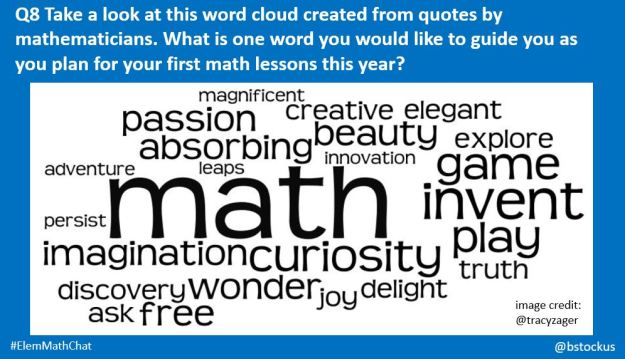 My lens for a long time has been play, but I think I’m due for a new one. Not sure what it’s going to be yet. What about you? What word would you choose to use as a lens for the work (and fun!) ahead this school year?

This year my colleague Regina Payne and I tried something new as we visited classrooms across our district – numberless graphs. Similar to a numberless word problem, you present a graph with no numbers and proceed to have a rich mathematical discussion as you slowly reveal more and more information on the graph. Early in the school year, I shared a Halloween-themed numberless graph, and I also wrote a blog post about it.

We briefly touched on this work in our session at the 2017 NCTM annual conference, and it’s been exciting to see my #MTBoS colleagues taking the idea and running with it in their schools! In case you don’t follow them – which will hopefully change after reading this post! – I want to share their work so you don’t miss out on all the great stuff they’re doing.

Kassia has written two wonderful blog posts about how she took our ideas and tinkered with them to create a data routine called Notice and Wonder Graphs. I like this name because it’s more inclusive than numberless graphs. When it comes to graphs, you might hide the numbers, but you could just as easily hide other parts of the graph first. It all depends on your goals and how you want the conversation to unfold. In Kassia’s first post, she shares this graph with students. Notice it has numbers, and little else.

Curious what it’s about? Then check out Kassia’s post. I’m betting you’ll be quite surprised when you reach the final reveal.

I love this routine for many of the reasons that I love Brian’s numberless word problems–it slows the thinking down and focuses on sense-making rather than answer-getting.

But I also love it because it brings out the storytelling aspect of data. So often in school (especially elementary school!) we analyze fake data. Or, perhaps worse, we create the same “What is your favorite ice cream flavor?” graph year after year after year for no apparent purpose.

I’ve decided to make it a goal to think more about data as storytelling, data as a way to investigate the world, and data as a tool for action. In my next two posts (YES, people! I’m firing the ole blog back up again!) I’m going to delve into the idea that we can use data to discuss social justice ideas and critical literacy at the elementary level. I’m just dipping my toe into this waters, but I’m really excited about it!

And Kassia did just that! So far she’s followed up with one post where her students noticed and wondered about a graph showing the percent of drivers pulled over by police in 2011, by race. I love how the graph sparked a curiosity that got her students to dive more deeply into the data. How often does a graph about favorite desserts or our birthday months spark much of any curiosity?

Jenna shared a numberless graph that immediately got me curious! This is one she created to use with 6th grade students.

I can’t help but notice a bunch of dots grouped up at the beginning with a just few outliers streeetttcchhiiing across almost to the very end.

Once she included some numbers, my first instinct was that this graph is about ages. Apparently I wasn’t alone in that assumption!

And then there’s the final reveal.

So why did Jenna create and share this graph? What was her mathematical goal?

I especially loved this observation about how her students treated the dot at 55 before they had the full context about what the graph is really about.

Chase wrote a detailed post about how he worked with 2nd grade teachers to do a lesson study about interpreting graphs.

Chase walks you through the lesson he and the teachers created and tried out in three different classrooms. I love how he details all of the steps and even shares the slides they used in case you want to use them in your own classroom.

He closes the post with a great list of noticings and wonderings about continuing this work going forward. Here are a couple of them about numberless graphs specifically:

A huge thank you to Kassia, Jenna, and Chase for trying out numberless graphs and sharing their experiences so we can all be inspired and learn from them. I can’t wait to see how this work continues to grow and develop next school year!

If you’re interested in reading more first-hand accounts of teachers using numberless word problems and graphs, be sure to check out the ever-growing blog post collection on my Numberless Word Problems page. I recently added a post by Kristen Acosta that I really like. I’m especially intrigued by a graphic organizer she created to help students record their thinking at various points during the numberless problem. Check it out!