After a brief interlude, it’s time to get back to the blog series I started recently about analyzing assessments.

In my previous post I shared the order of questions based on item difficulty for the 2018 5th grade STAAR for the entire state of Texas. Here it is again:

Here’s my question: What is the likelihood that any given campus across the state would have the exact same order if they analyzed the item difficulty just for their students?

Some of my noticings:

But is there an easier way to identify these differences than looking at an item on one list and then hunting it down on the second list? There is!

This image shows the item difficult rank for each question for Texas and for the campus. The final column shows the difference between these rankings. 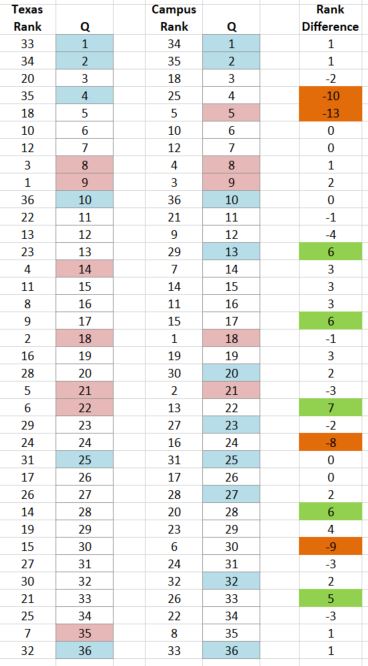 Just in case you’re having trouble making sense of it, let’s just look at question 9.

As you can see, this was the number 1 most difficult item for the state of Texas, but it was number 3 on the same list for this campus. As a result, the rank difference is 2 because this question was 2 questions less difficult for the campus. However that’s a pretty small difference, which I interpret to mean that this question was generally about as difficult for this campus as it was for the state as a whole. What I’m curious about and interested in finding are the notable differences.

Let’s look at another example, question 5.

In case you’re curious, here’s question 5 so you can see for yourself. Since you weren’t at the school that got this data, your guesses are even more hypothetical than there’s, but it is interesting to wonder.

Let me be clear. Exploring this question isn’t about placing blame. It’s about uncovering, learning what can be learned, and making a plan for future instruction so students at this campus hopefully don’t find questions like this so difficult in the future.

Let’s look at one more question from the rank order list, question 22.

Again, in case you’re curious, here’s question 22 to get you wondering.

In Texas this is called a griddable question. Rather than being multiple choice, students have to grid their answer like this on their answer sheet:

Griddable items are usually some of the most difficult items on STAAR because of their demand for accuracy. That makes it even more interesting that this item was less difficult at this particular campus.

We can never know exactly why a question was significantly more or less difficult at a particular campus, but analyzing and comparing the rank orders of item difficulty does bring to the surface unexpected, and sometimes tantalizing, differences that are well worth exploring and celebrating.

Just this week I met with teams at a campus in my district to go over their own campus rank order data compared to our district data. They very quickly generated thoughtful hypotheses about why certain questions were more difficult and others were less so based on their memories of last year’s instruction. In meeting with their 5th grade team, for example, we were surprised to find that many of the questions that were much more difficult for their students involved incorrect answers that were most likely caused by calculation errors, especially if decimals were involved. That was very eye opening and got us brainstorming ideas of what we can work on together this year.

This post wraps up my series on analyzing assessment data. I might follow up with some posts specifically about the 2018 STAAR for grades 3-5 to share my analysis of questions from those assessments. At this point, however, I’ve shared the big lessons I’ve learned about how to look at assessments in new ways, particularly with regards to test design and item difficulty.

Before I go, I owe a big thank you to Dr. David Osman, Director of Research and Evaluation at Round Rock ISD, for his help and support with this work. And I also want to thank you for reading. I hope you’ve come away with some new ideas you can try in your own work!

1 thought on “Areas of Celebration and Exploration”